The Best Ski Resorts in Korea

I’m often asked which is the best ski resort in Korea, and I always answer that it depends what you’re looking for. So here’s the lowdown on the best resorts in Korea, presented in top-3s: For all-mountain riding, High1 and Yongpyong are the two standout ski resorts in Korea. Yongpyong was the original (built in the 70s), while High1 is just a decade old. Both are high enough to not be reliant on snowmaking (as most Korean resorts are), are relatively large, have a good mix of terrain, and make reasonable effort with their terrain parks.

Phoenix Park is mostly famed for its freestyle offerings, with a halfpipe and the country’s best terrain park (see below). Freestyle aside, Phoenix Park is also the 4th-largest ski area in Korea; this means it offers decent downhill skiing in addition to great freestyle, making it a good all-round option. Phoenix Park has the biggest & best terrain park in Korea, well-maintained with kickers and jib features for all levels, and one of only two halfpipes in the country. It was no surprise that Phoenix Park was chosen to host the freestyle events for the Pyeongchang Olympics.

Welli Hilli Park is the other standout in the freestyle department with an advanced park and a beginner-intermediate park running down either side of the beginner slope, served by the Alpha chairs which enable you to do rapid laps of the park. It also has Korea’s other halfpipe, which is the closest pipe to Seoul since Vivaldi Park got rid of theirs.

Yongpyong is a great all-round resort, and they don’t neglect their freestyle offerings; while not quite as impressive as Phoenix and Welli Hilli, they do have a sizeable, decent quality terrain park perfectly positioned in a nice sheltered spot next to a chairlift.

I should also mention High1 here, which is another great all-round resort with a decent park; only problem is the fairly exposed location on a ridge, meaning you often have to deal with pretty strong winds blowing across.

These resorts are all quite far out from Seoul – if you’re looking for a decent terrain park closer to Seoul, Jisan is your best bet. The southern location isn’t great for the snow quality, but Muju Deogyusan has the biggest vertical drop and the longest runs in the country. The setting in Deogyusan National Park also gives it the best views!

All-round star resorts High1 and Yongpyong don’t quite match Muju Deogyusan for vertical drop, but they’re not far off and both offer a good selection of sections and runs. They also both get better snow than Muju so will often actually be better, especially early or late in the season. I rate High1’s downhill skiing slightly better than Yongpyong’s as the layout at High1 allows for a better range of top-to-bottom options – the runs come down from the ridges on opposite sides of a valley, all eventually funnelling down to Valley house at the bottom, and some of them are genuinely steep which is rare in Korea and will be more satisfying for advanced skiers & riders.

Yongpyong is a similar size to High1, but the layout is a little disjointed – there’s only one full top-to-bottom run (from the gondola) and it has a fairly gentle gradient (though still quite fun for advanced riders with a bunch of corners to carve round). There are good steeps in the Rainbow section, but they’re accessed only via the gondola and cut off from the rest of the resort. For lower level and intermediate levels, Yongpyong has a better range than High1 and usually less challenging conditions i.e. not as icy & windy.

Most Convenient Ski Resorts from Seoul (without a car) 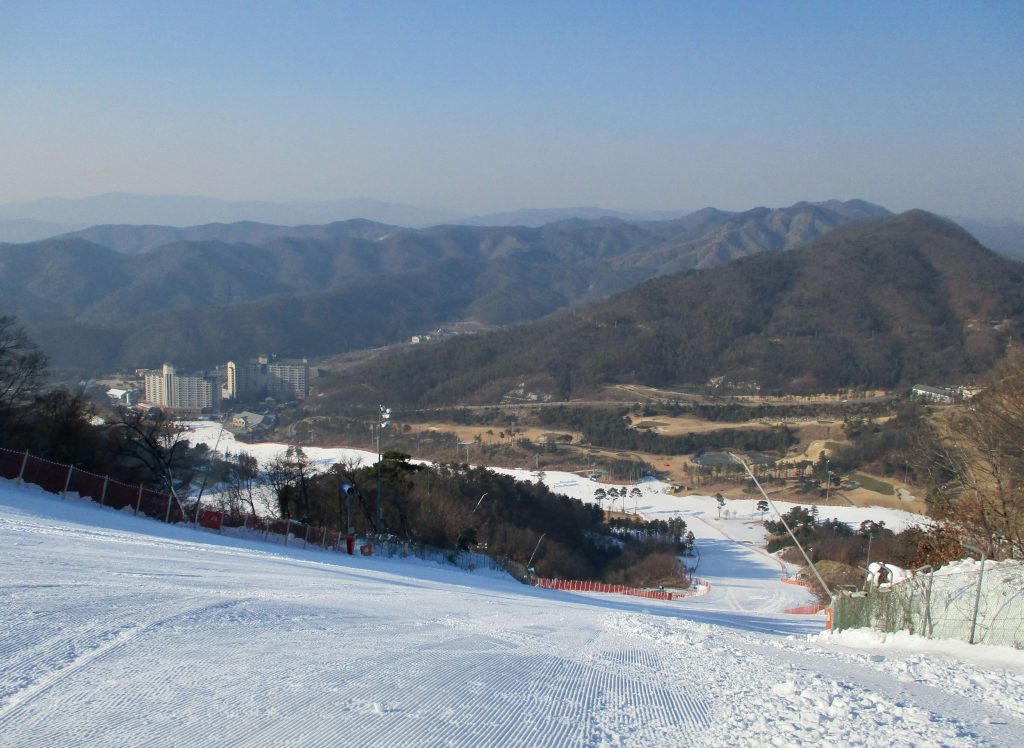 With a free shuttle from Sports Complex Station taking just 75 minutes in good traffic and no reservations required (you can just turn up and board the bus), Oak Valley is super convenient and a decent size for the short travel time.

Although located in Gangwon-do province, Elysian Gangchon can be reached on the Seoul Metro or the ITX Cheongchun express train with regular shuttle buses from the station, again meaning no reservations are required and you can head out there at whatever time suits you.

Vivaldi Park is another Gangwon-do resort which is actually very convenient to Seoul, thanks in particular to their free shuttle bus for international tourists. It takes 90 minutes from Myeongdong and costs you nothing, just make sure to make your shuttle bus reservation 2 days in advance as required. Vivaldi is the biggest hill you can reach from Seoul for free without a season pass.

Also a shout out to Bears Town which has a really good (paid) shuttle bus system – if you’re in northern Seoul, this is probably your most convenient option.

Phoenix Park during the Pyeongchang Olympics

What do you think about this list? Agree? Think it’s nonsense? Leave a comment below and I’ll get back to you.

Also see here for full reviews of every resort in the country, and here for a size comparison of all ski hills in Korea using satellite imagery.

83 comments on “The Best Ski Resorts in Korea”