The Biggest Ski Resort in Korea

If you’re wondering what the biggest ski resort in Korea is, by most measurements it’s Yongpyong – though if you’re talking about vertical drop, Muju Deogyusan is the top dog (not including the Olympic courses at Jeongseon Alpine Centre, which will be dismantled after the games). High1 isn’t far behind, but then the rest of Korea’s ski resorts are significantly smaller.

While putting this site together, I tried in vain to dig up all the stats for ski area size, but only a handful of resorts provide that information; also, even when they do it’s not always clear if they’re giving the area of the slopes themselves, or the entire area within the ski area’s external boundary (even though most of that is unrideable forest – forget going off-piste in Korea!)

So I started comparing them on Google Maps, and that formed the idea for this post – displaying the sizes of all Korea’s ski resorts side-by-side using the satellite view in Google Maps! No stats or figures here; just a visual comparison of how much area they all cover, also allowing you to see how much of that area is actually rideable.

Here they all are, shown at the same scale, in (roughly) descending order (click resort names for individual reviews): 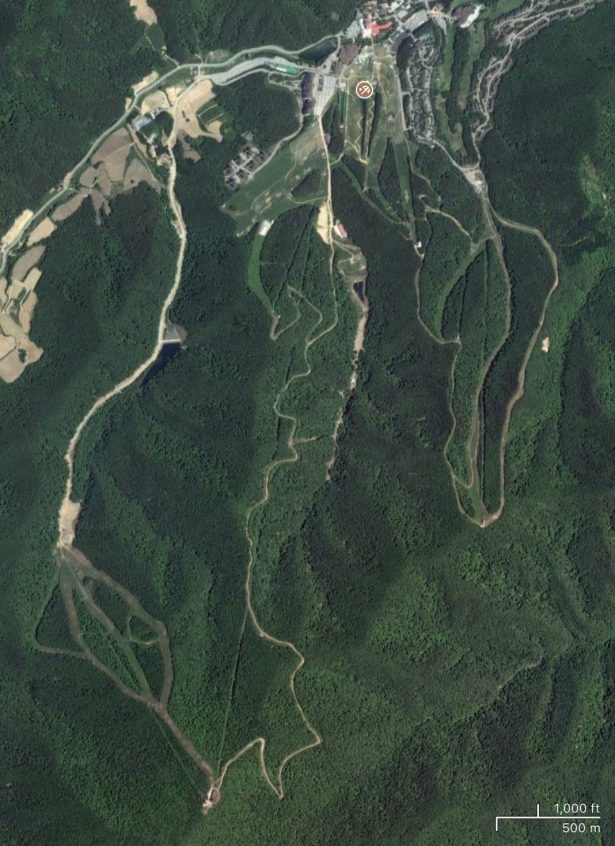 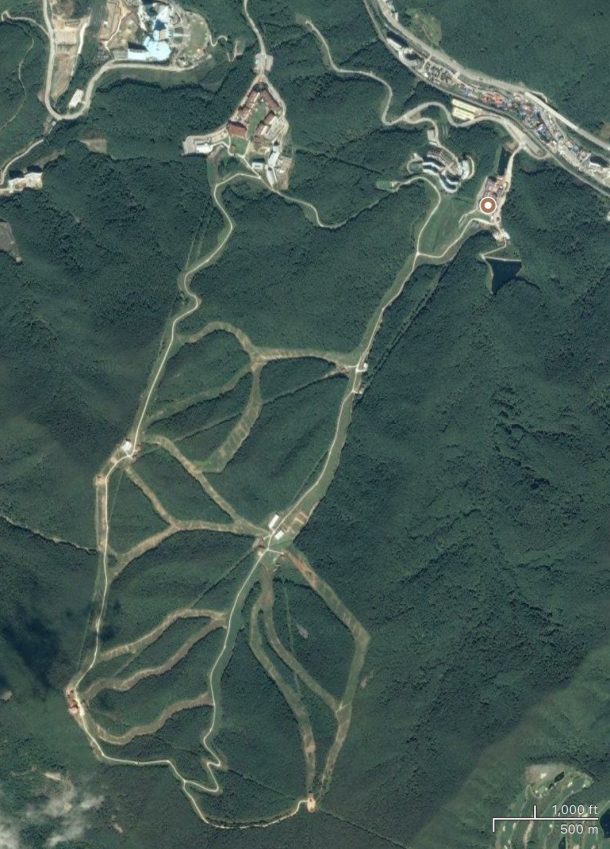 Jeongseon Alpine Centre (still a construction site at the time this image was taken, but clearly showing the piste layout) 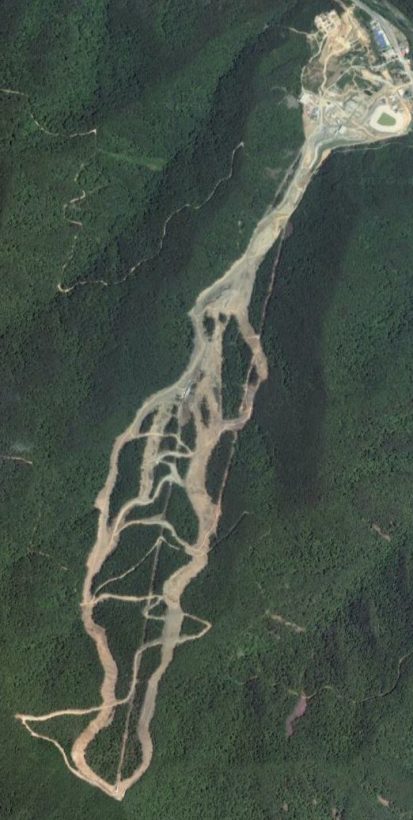 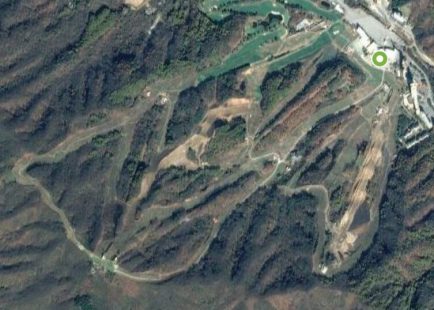 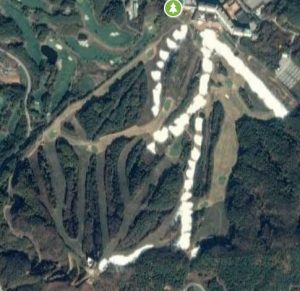 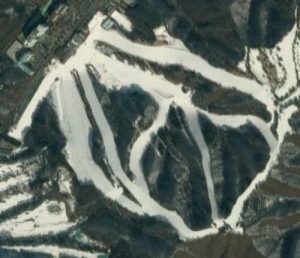 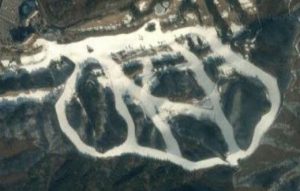 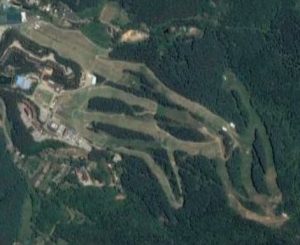 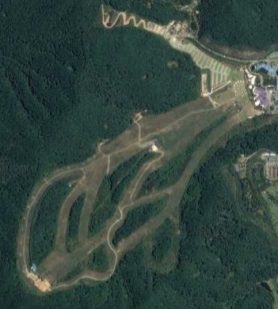 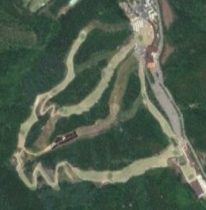 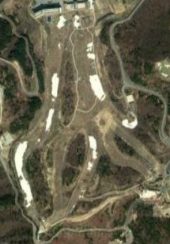 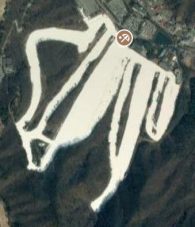 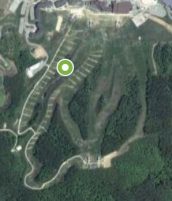 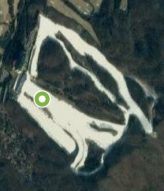 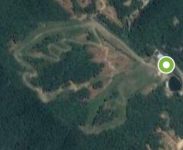 (For the locations of all these resorts, see the map here)

So there you go, that’s what they all look like from space! Should give you some idea what to expect, but if you’re trying to decide where to ride in Korea, of course size isn’t everything – you may want to consider freestyle options, halfpipe availability, quality of the downhill ski terrain, travel time from Seoul, and so on – so here’s a list of the best ski resorts in Korea according to various criteria.

Also, as the Pyeongchang 2018 Olympics will disrupt usual operations at the various host mountains, here’s a list of the best Korean hills to visit during the Winter Olympics

And just in case you’re wondering how the Korean ski resorts compare to some of the big boys internationally, here’s Yongpyong, Whistler (Canada), and Mayrhofen (Austria), all shown at the same scale: 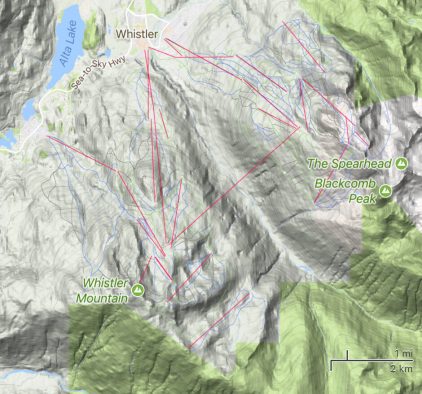 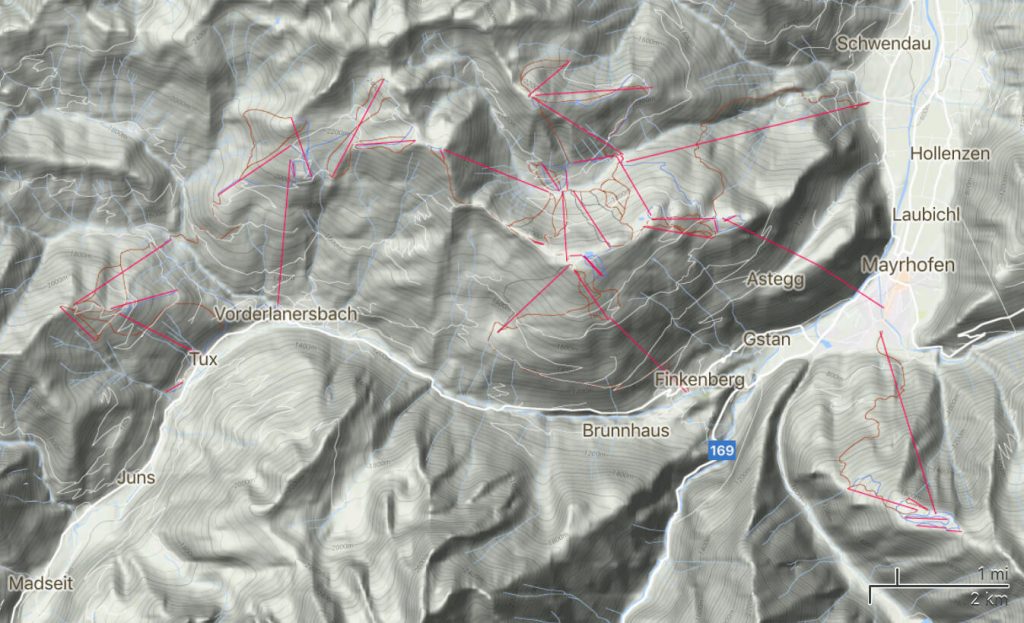 So as you can see, the biggest ski resort in Korea is significantly smaller than the biggest in Canada and one of the biggest in Austria; I haven’t even compared it to the world’s biggest resorts like Les Portes du Soleil (in France / Switzerland) because I couldn’t fit them in a screenshot without zooming out so far you can’t make anything out!

But the likes of Korea’s Yongpyong and High1 do compare favourably for size with, say, Cypress Mountain (Vancouver) and Cardrona (Queenstown / Wanaka) – which is to say, respectable.

And that should give you an idea of how big Korea’s ski resorts are!

Any comments or questions? Give me a shout below.

For the full list of reviews for every resort above, see here

Also check out the best Korean ski resorts according to various criteria, and if you’re visiting before/during the Olympics, see the top 5 hills to ski at during Pyeongchang 2018; for more information and the latest updates on Pyeongchang 2018 see here, and for the lowdown on accommodation options for the Olympics see here (or here for the Paralympics)

2 comments on “The Biggest Ski Resort in Korea”