Simply put, Korean food is awesome – especially if you dig spicy food and strong flavours. If you’re not great with spicy stuff you need to proceed with caution but can still eat really well. Vegetarians & vegans may struggle a bit though, as the cuisine goes pretty heavy on the meat & seafood.

There’s a lot of seasonal variation, with dishes like naengmyeon (iced buckwheat noodles) for the hot summer months that you’re obviously not going to be eating while visiting for the Winter Olympics! So with the freezing winter weather in mind, here’s a Korean food primer for anyone visiting for the Pyeongchang Olympics or Paralympics

Korean cuisine for non-spice lovers
If you’re not good with spicy food, go for these: bibimbap, jeon, seollongtang, samgyapsal, and hotteok.
Korean cuisine for vegetarians & vegans
Well, first of all good luck – Korean cuisine is often a meat overload. It’s not impossible for herbivores though, if you know what to look for – see here for help with that. 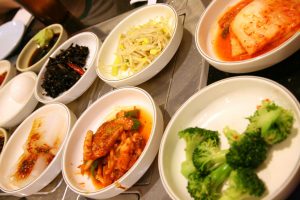 Side dishes: most meals you order in Korea will come with a set of side dishes (think veg, pickles, whitebait, glass noodles, etc etc) free of charge, as standard. These will be laid out in small bowls and vary from place to place, but almost always include the ubiquitous kimchi.

(If you don’t know it, kimchi is basically spicy fermented cabbage, though countless variations exist with the cabbage switched for (or complimented with) white radish, cucumber, carrot, etc. The best stuff is handmade by mom in clay jars and buried to ferment for months) Jjigae: jjigae means stew, and there’s a huge variety of different jjigae to try. They’re warming, hearty bowls of spicy goodness, often eaten with rice and always with the usual array of side dishes, and being served bubbling hot in stone bowls they really hit the spot in winter.

Kimchi jjigae is one of the most common, usually involving meat stewed with copious amounts of kimchi plus some other veg, and is a real representative dish of Korean cuisine.

Sundubu jjigae is similar to kimchi jjigae, but with seafood and soft tofu (sundubu) instead of meat, a bit less kimchi, and a bit more other veg (mushrooms are usually in the mix). They also crack an egg in just before serving, the egg setting in the hot broth and contrasting nicely with the tofu. I love it, and this is my go-to dish when I’m not after anything else specific.

There are many more jjigae varieties, but these are the two I’d advise trying out first. 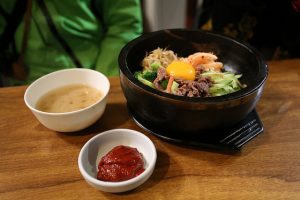 Dolsot bibimbap: bibimbap is generally an easy entry-level dish for those feeling a bit unsure about Korean cuisine, basically consisting of a bunch of toppings (mostly veg and pickles, often an egg, and some sauce) served on a bowl of rice. It comes in various forms, many served in cold metal bowls – for something more warming in winter, look out for dolsot bibimbap which is served in a sizzling hot stone bowl. 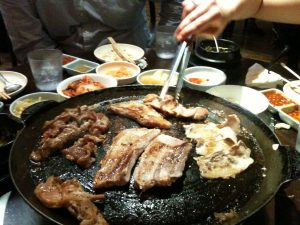 Samgyeopsal: another easy one for Korean food beginners, this is popular internationally as Korean barbecue. Best for group eating while drinking plenty of soju & beer (don’t go for samgyeopsal alone!), and perfect for those who can’t handle spicy food. 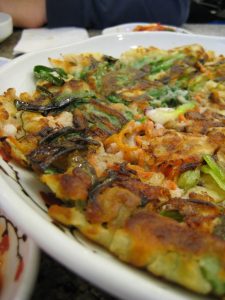 Jeon: a form of medium-thick savoury pancake, jeon is basically fried batter with whatever filling you order – common ones are kimchijeon, pajeon (with green onions), and haemul pajeon (seafood).

It’s served with a dipping sauce and is another good option if you’re easing yourself into Korean cuisine for the first time; it’s also a great choice for non-spice fans, and for veggies/vegans too (as long as you order the right one – make sure there’s no seafood)

Jeon is particularly noted as a food for rainy days, paired with makgeolli (see drinks, below); you won’t experience any rainy days in Seoul during the Olympics, but jeon also goes down very well in subzero temperatures – with or without makgeolli.

Haejangguk: the name translates as hangover soup – this is the remedy for when you’ve had a few too many shots of soju (something you’re very likely to experience when visiting Korea!)

It’s a spicy beef soup, specifically the backbone, with the meat cooked and served on the bone. You basically get a bowl of red broth with a big chunk of spine sitting in it – which may well have the opposite of the intended effect if you’re hungover and feeling squeamish… 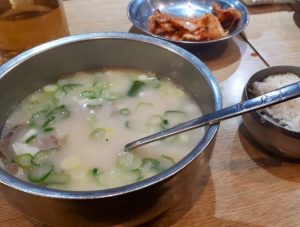 Seollongtang: if you want to try one of the Korean soups & stews without the spice level, this is the one for you; it’s a slow-cooked beef soup, with a milky colour from the beef being cooked on the bone, though it’s served without the bones (unlike haejangguk). This also makes it high in collagen, which accounts for its popularity among young Korean ladies in pursuit of flawless skin. It’s also a popular drunk food alternative to haejangguk.

Street food in Korea is sold from roadside stalls with tent flaps they pull down in winter, meaning they double up as places both to fill up and to warm up. You see these little tents along the sides of the street in busy nightlife and shopping/sightseeing areas, and in the markets; they usually serve assorted items and have a little counter where people huddle to eat, though you can also ask them to bag it up to take away (some items like hotteok are take-away as standard, they give you them in a little paper cup or cardboard holder). If they have odeng, make sure to help yourself to a cup of the odeng broth to sip and warm your icy fingers with. 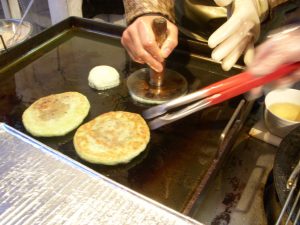 Hotteok: a street snack usually only found in winter, these are sweet discs of pancake dough with a hot, gooey sesame & cinnamon filling. Be warned though – hotteok are perhaps the single most addictive food this author has ever encountered. One is never, ever enough.

Odeng: strips of fish cake on skewers cooked in broth, super cheap (500 won or a little more), and usually eaten while you’re waiting for your tteokkpokki to cool down enough to eat!

Tteokkpokki: this one’s a common street food item which is particularly good in cold weather. It’s basically like gnocchi but made from rice, and stewed in a spicy (sometimes extremely spicy!) sauce usually with strips of fish cake or a little veg of some sort.

Kimbap: often described for sake of ease as Korean sushi, kimbap is rice rolled in seaweed around some sort of filling. While it does look similar to sushi rolls, the fillings are totally different e.g. sausage & pickles or beef & kimchi. Not exactly a warming winter option, but it makes a great snack for eating on the move.

Gyeranppang: these are basically whole eggs baked into little pieces of bread. The bread’s usually quite sweet which might taste a bit weird at first, but these little snacks are good for something hot to eat on the go.

Sannakji means raw octopus; it’s a plate of still-writhing octopus tentacles which wriggle around in your mouth and stick to the sides with their suckers – make sure to chew them very thoroughly so you don’t end up being one of the handful of people each year who choke on it!

If the plate of tentacles isn’t Temple of Doom enough for you, you can go even further and order the whole octopus to eat live (which you are expected to swallow whole – this will be familiar to fans of the movie Oldboy 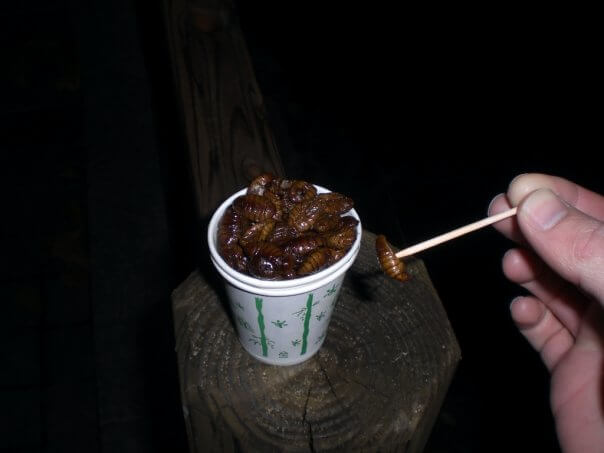 Beondegi: stewed silk worm pupae, beondegi have a bitter flavour and are quite mushy rather than crunchy. Usually bought by the ladleful from street vendors in paper cups (which are fantastic for warming your hands up even if you don’t eat the contents), they’re also often available as a side dish in fresh fish restaurants (the same ones selling sannakji)

Sundae: pig-blood sausage, usually including either chopped rice noodles and/or offal, with the sausage skin being the intestine. It smells so utterly foul to me that I’ve never been able to get a piece into my mouth – and am totally cool with that! If you’re into tripe-type stuff you’ll probably love it though. It’s usually served at the same street food tents as tteokkpokki. 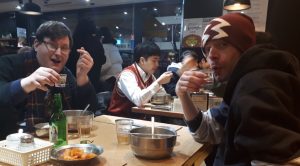 Soju: a cheap mass-produced rice alcohol sold in small green bottles and taken in shot glasses, soju is drunk in Korea entirely for the purpose of getting drunk. You don’t savour it – you neck it! A plethora of drinking games exist to expedite this process, and if you get drinking soju with a group of locals you’ll likely be needing a bowl of hangover soup in the morning. Soju’s usually around 15-20% alcohol, and just a dollar or two for a 360ml bottle. If it tastes too rough by itself, simply use it to supercharge your beer by making somaek i.e. by pouring it straight in your beer. 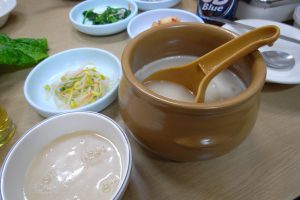 Makgeolli: a kind of fermented rice wine, makgeolli has quite a thick consistency, sometimes smooth, sometimes lumpy (the lumps being rice), and though it may look like some sort of liquid yogurt the taste’s closer to Japanese sake. It’s not too strong (usually clocking in around 6 or 7%), and the cheaper mass-produced bottled variants come in all sorts of flavours (banana and so on). The best stuff’s homemade, chunky, and served in a bowl with a ladle and cups. Makgeolli is commonly drunk while eating jeon, a popular pairing on rainy days.

Any questions or comments about Korean food? Leave a reply below!

Coming to the Winter Olympics? For detailed info see here for accommodation and here for transportation