Posted in Pyeongchang 2018 No Comments ↓ 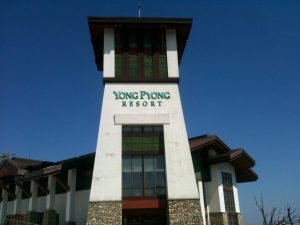 The 2017/8 season is finally underway, with Yongpyong, High1, and Phoenix Park all having opened on November 17th/18th.

Welli Hilli Park, Elysian Gangchon, Jisan Forest, and Vivaldi Park are all aiming to open on the 24th/25th, with Oak Valley scheduled for the 29th and the remaining Seoul area hills in early December.

Pyeongchang 2018 is now just 3 months away, but many would-be visitors are still in two minds about coming due to uncertainties over accommodation and transportation. The majority of visitors will be staying in Seoul and travelling on the new KTX bullet train to the Olympic venues, but with standing tickets available capacity shouldn’t be an issue. The Pyeongchang Rail Pass (see below) also makes it affordable to commute each way multiple times, so if you’re looking at doing that make sure to buy a pass by December 10th. (Update: sales period has been extended to January 31st)

Most hotels are now booked out in Pyeongchang, Gangneung, Donghae, and Wonju. Sokcho still has some availability, and Seoul has plenty. See here for a full guide on where to stay

Last month Korail announced a Pyeongchang Rail Pass for the Olympics; this is key for anyone staying in Seoul and making repeated round trips on the new KTX train to the venues. Details here

Yongpyong and Phoenix Park have confirmed they’ll have shuttle buses from their nearest KTX stations (Jinbu and Pyeongchang, respectively) for guests and skiers throughout the season; Alpensia will have no direct shuttle from the station, but can be reached by hourly shuttle from Yongpyong (during the Olympics the events will be accessed by separate shuttle buses for ticket holders only)

Alpensia won’t be open at all for skiing this winter (sledding will be available though). The season schedules for the ski hills at the host resorts are as follows:

Yongpyong open all season, but with the Rainbow and Silver areas (gondola included) closed off

Alpensia closed (but with sledding available prior to the Olympics)