I spent most of week 1 watching on TV (in between working and snowboarding), but did get over to Pyeongchang for the day to see some halfpipe action. Chloe Kim absolutely killed it, and it was worth dealing with the brutal cold to be there! 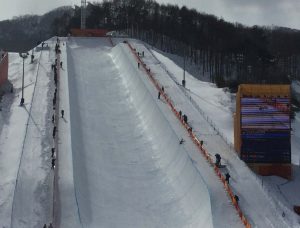 I went to Phoenix Park from Seoul by KTX to watch the pipe, then went over to Alpensia by shuttle bus to check out the Olympic Plaza & Olympic Park (but didn’t attend any events there), then an evening KTX back to Seoul.

The transportation couldn’t have been smoother; I bought my KTX tickets a few days advance, the trains ran on time, and though I could only get a standing ticket for the return trip there were some empty seats and I was able to sit. I should note here that I wasn’t travelling during Seollal (Lunar New Year) – some frustrated visitors weren’t able to get on the Gangneung-bound trains they needed on Feb 14th & 15th to due to the holiday, and the same looks likely to be the case on Seoul-bound trains on Feb 17th & 18th.

I found the shuttle buses easy to use, plentiful, and not crowded, though again I should note that I wasn’t trying to get a shuttle back to the station after a late-finishing event, so the demand wasn’t high. In the first few days of the Games (especially after the opening ceremony) there were reportedly some quite chaotic scenes with cold & fed-up crowds trying to board buses to the station after long waits outdoors. They seem to have got things ironed out now, so hopefully after the closing ceremony things will run smoothly. 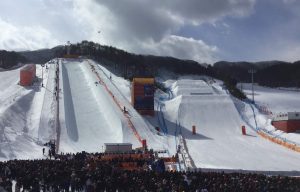 Phoenix Park: the security line at Phoenix was the only crappy part of the day, took more than 30 mins to line up for the security check (which seems to be mainly about stopping prohibited foodstuffs – make sure any snacks you take in are packaged & unopened, and no fresh foods like sandwiches or fruit). Aim to arrive at Pyeongchang Station over an hour before the start time to have enough time for the shuttle bus & security check. Food lines inside the venue weren’t too bad, but they only had stuff like hot dogs & instant noodles; opposite Phoenix Park there’s a bunch of bars & restaurants which would be a much better option for eating. 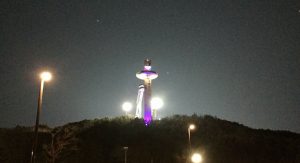 Alpensia: I was just having a look around & checking stuff out at Alpensia (haven’t been to an event there yet), and found that Alpensia Holiday Inn was open as were all the restaurants, cafes etc around it. The main media centre is set up there, and for anyone seeking a warm place to shelter or somewhere to eat decent food near the sliding centre you can head over to Holiday Inn. The lobby has a cafe with a nice fireplace and decent wifi. If you’re wanting to have a look at the stuff around Alpensia but don’t have a ticket for the Olympic Park, take the shuttle to the sliding centre as the drop off point is in front of Alpensia Resort from where you have a good view of the ski jump tower and can walk up to Holiday Inn.

There have been some reports of confusing scenes with the shuttle buses at Alpensia Olympic Park after late-finishing events, so allow plenty of time and work out in advance what route you’re taking (save a copy of the map here on your phone)

And yeah: the wind really is savage. Wrap up, and then some. 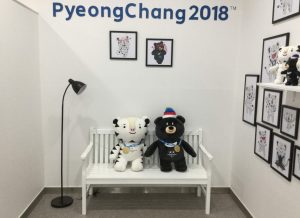 These guys are everywhere (pictured here at Jinbu Station)

If you’ve been watching on TV you’ll have noticed a lot of empty seats at some events. Plenty of tickets are available for purchase on the day, so if you’re thinking about a last-minute trip youll definitely be able to get in to some events (but not the most popular ones like figure skating & speed skating or the ice hockey finals)

If you’re looking for accommodation for a last-minute trip to Pyeongchang, see here for a full guide on where to stay.

Closing Ceremony: extra trains have been added, with post-ceremony departures to Seoul from Jinbu Station now scheduled for 23:49, 0:10, 0:34, 1:45

Olympic Shuttle Buses
You can see the shuttle bus diagram here (scroll down). There are also some free shuttle buses from Seoul to the venues for ticket holders, but advance reservation is required and you need a Korean phone number to register on the app. See here

The new KTX line to Pyeongchang & Gangneung started service in December; you can see the full schedule here (pages 5 & 6 for the Olympic dates, and page 9 for the Paralympic dates), and you can search & book online here

For full details on the new KTX see here

Where to Eat & Drink in Gangneung

If you’re spending some time in Gangneung during the games, there’s a handy list here of places to eat & drink

With the Olympic host mountains being closed (or partially closed in the case of Yongpyong), if you want to do some skiing yourself while in Korea see here for the best places to do so.

See here for a roundup of what’s on offer at the various hospitality houses.