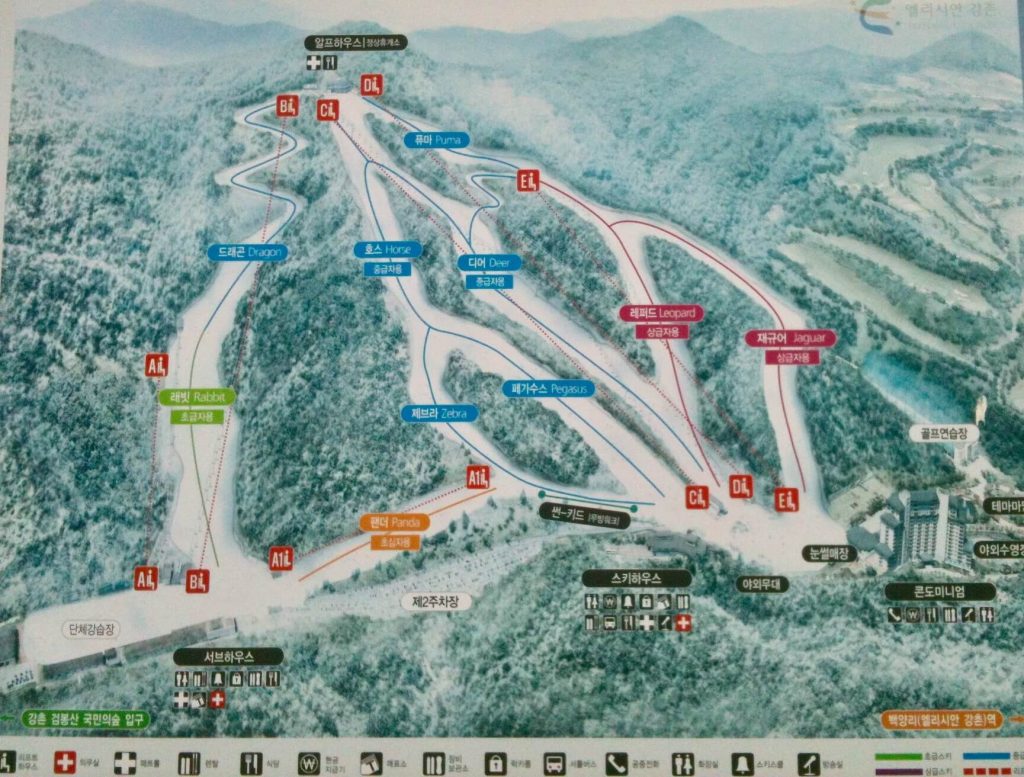 Elysian Gangchon is located in Gangwon-do province, but due to its excellent train connection to Seoul you can pretty much think of it as a local Seoul hill along with those in Gyeonggi-do province (in fact it’s even easier to get to than most of those, especially if your starting point is in northern Seoul); hence it’s listed here under both Gangwon-do and the Seoul area. It’s a fairly typical Korean resort, modest in stature and part of a larger resort concept including a golf course and some large hotel/condo developments, with excellent base facilities and good lift infrastructure. The flexible ticketing and ease of access from Seoul give it top marks for convenience.

(Sorry about the poor pictures on this page – I’ve never managed to be at Elysian with a good camera and nice weather at the same time! It’s nicer than my photos make it look) 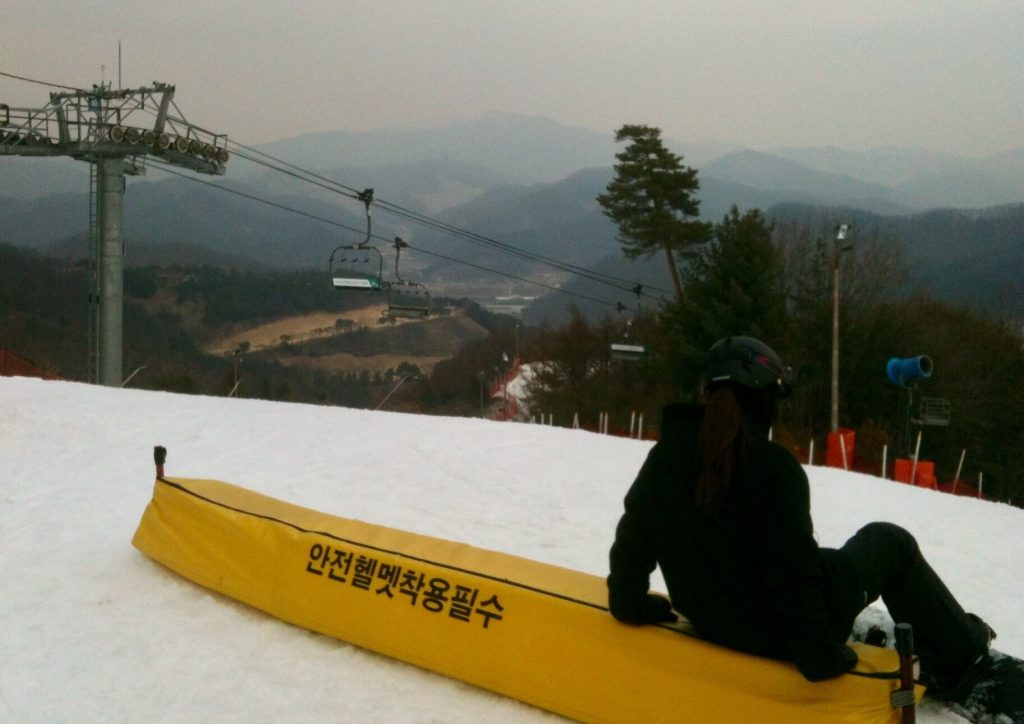 I like these handy little strapping-in perches they use in Korea! Also in this pic note the hillside golf course to the left, and the train station visible down the valley

Elysian offers 6 chairlifts, essentially all accessing the same top station from two base areas (Ski House and Challenge House); with a vertical drop of just 172m from the top, you roughly speaking have three short options down. Skier’s right takes you for a cruisy run down ‘Dragon’ & ‘Rabbit’ to the Challenge House base; the central option and skier’s left both go down to the main Ski House base, with a couple of route options each. The further over to the left you go, the more challenging the run; the ‘Jaguar’ run at far skier’s left is one of the few genuinely steep slopes in the Seoul area.

The terrain park, such as it is, is located under the central chairlift; it’s a rather humble effort and isn’t always maintained. Here it is looking rather sorry and unloved on a quiet March weekday: 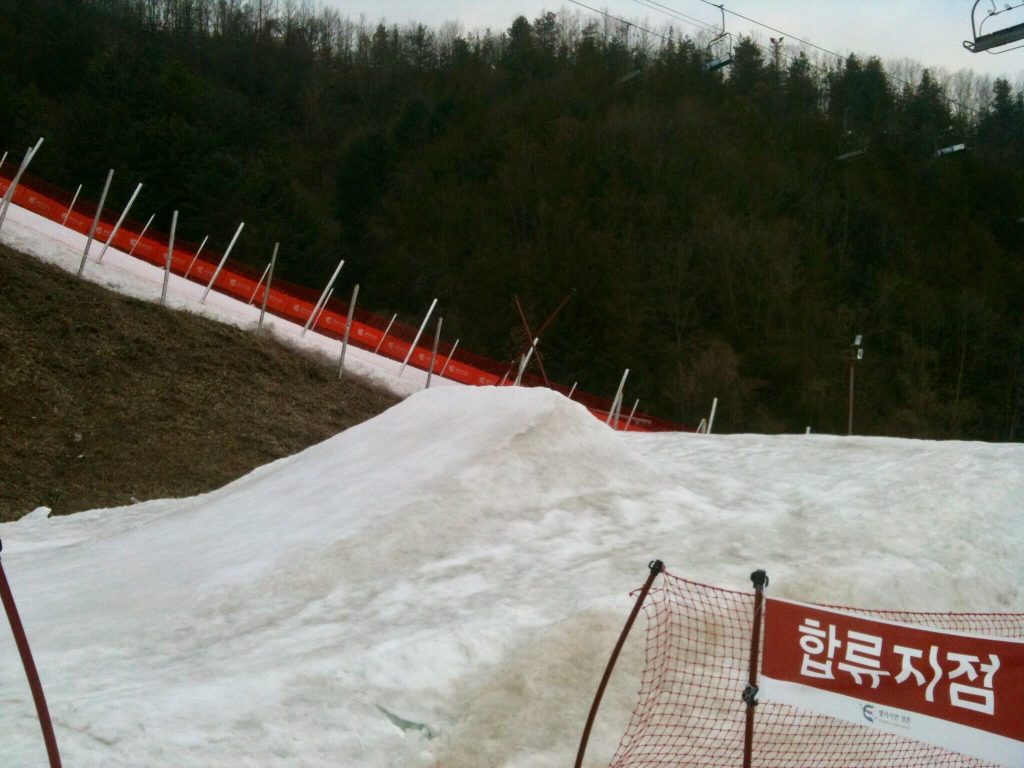 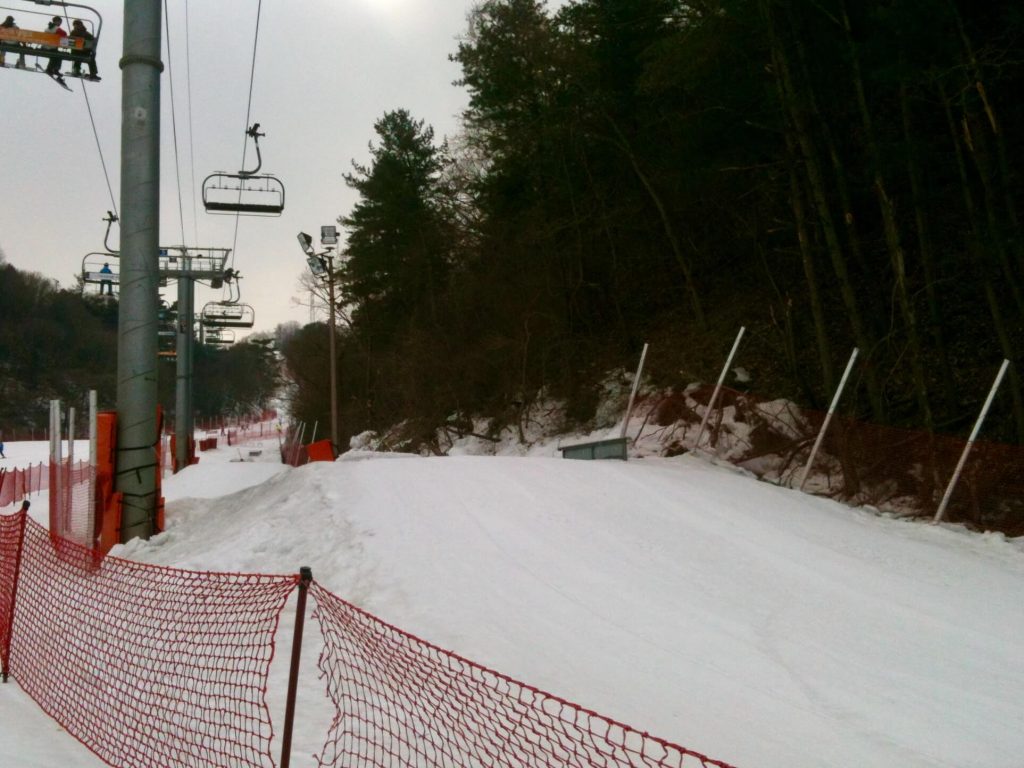 For beginners, the bunny slopes ‘Panda’ and ‘Rabbit’ (with their own chairlifts) are at the Challenge House base; intermediates will probably be happiest starting with the ‘Dragon’ run from the top down to there, and progressing to the other side. Advanced riders will have the whole hill skied out several times over within a 4-hour ticket, and will be happiest on ‘Leopard’ and ‘Jaguar’ over towards the left boundary.

Elysian Gangchon is good for:

Combining skiing with a more general sightseeing trip, especially for fans of Korean drama – Elysian Gangchon is near Gapyeong, home to the Petite France theme park and Nami Island (famous for the TV drama Winter Sonata

); you can book a 1-day tour of Nami Island & Elysian Gangchon here.

Long hours – open until 5am at weekends!

Learners, and those progressing to intermediate.

Despite the small size, the runs & layout are actually quite well-designed and mix it up better than the other similarly sized resorts.

Elysian Gangchon is not so good for:

Size. Small even by Korean standards, it’s the smallest hill in Gangwon-do except tiny Alpensia.

Freestyle. Though there is a terrain park, it’s a bit of an afterthought.

Elysian does well on this front, as your ticket runs from whenever you buy it rather than requiring you to start and finish at set times; prices start at 56,000 won for a 4-hour ticket. The only slight issue is the 90-minute snow grooming break from 17:30 – if you have unused time on your ticket, you can use it when the slopes re-open at 19:00, but to avoid a forced 90-minute break you should aim to start skiing by 13:30 at the latest. If you need full equipment & wear rentals in addition to tickets, it works out cheapest to book a package (see here) including all that plus transportation.

They open at 9am and close at 5am(!) on Fridays, Saturdays, and holidays, and 3am on other days.

2018 opening week: only this run open, but only 20 dollars for the lift pass

If you want to stay at the resort itself, you can book Elysian Gangchon’s slopeside accommodation here; if you also need to rent equipment & wear, it works out cheaper to book a package including all the transportation, accommodation, rentals etc, see here.

If you’re intending to ski at Elysian Gangchon as part of a visit to Gapyeong, you can search for Gapyeong deals on Hotels Combined; another option is to base yourself at one the hotels in the nearby city of Chuncheon (Gapyeong is a couple of subway stops before Elysian Gangchon, while Chuncheon is a few stops beyond it; see below for access details). If you want to visit Nami & Elysian without staying overnight in the area, see this 1-day tour.

However, the majority of skiers will probably want to stay in Seoul and take the train or bus out to the hill for the day – for the best rates search Hotels Combined for deals in Seoul

Airbnb is also a great choice for Seoul or Chuncheon – hosts usually have it set up so you can arrive & check in by yourself without having to wait around or meet anyone, and the housing standards are decent with underfloor heating and excellent internet connections as standard. If you haven’t used Airbnb before, you can get a 35-dollar discount off your first rental by signing up through Snow Guide Korea; simply click on this link and register!

How to get to Elysian Gangchon

It’s easy to get there by train; Elysian is located about 2km from Baegyang-ri Station, with regular shuttle buses between the station and the resort. If you prefer to book a 1-day package including bus transportation, rentals etc, see here (this works out cheaper if you need to rent all the equipment & wear).

To get there yourself by train: Baegyang-ri Station is located on the Gyeongchun Line, which has two types of trains running on it. Regular subway trains run from Sangbong station (platform 5), stopping at all stations from there to the terminus at Chuncheon; it takes about 50 minutes from Sangbong to Baegyang-ri, plus however long it takes from your originating station to Sangbong, with the whole trip covered by one Metro fare. This is the cheaper option, but could take up to two hours depending where you start from.

The other type of train is the ITX-Cheongchun (ITX is ‘Intercity Train Express’), which starts from Yongsan Station in central Seoul and runs along a combination of the Jungang and Gyeongchun lines, making only limited stops; effectively it’s an express train, but not part of the Seoul Metro. It only takes an hour from Yongsan to Baegyang-ri by ITX, but costs 6,000 won and requires a separate ticket if you transfer from the subway to the ITX; for comparison, Yongsan to Baegyang-ri by Metro takes about an hour and 45 minutes, and costs 2,550 won.

You can board the ITX at Yongsan, Ichon, Oksu, Wangsimni, Cheongyangni, and Sangbong stations. If transferring from the subway, it isn’t necessary to go through the ticket barriers as the trains share the same tracks and stop at neighbouring platforms. 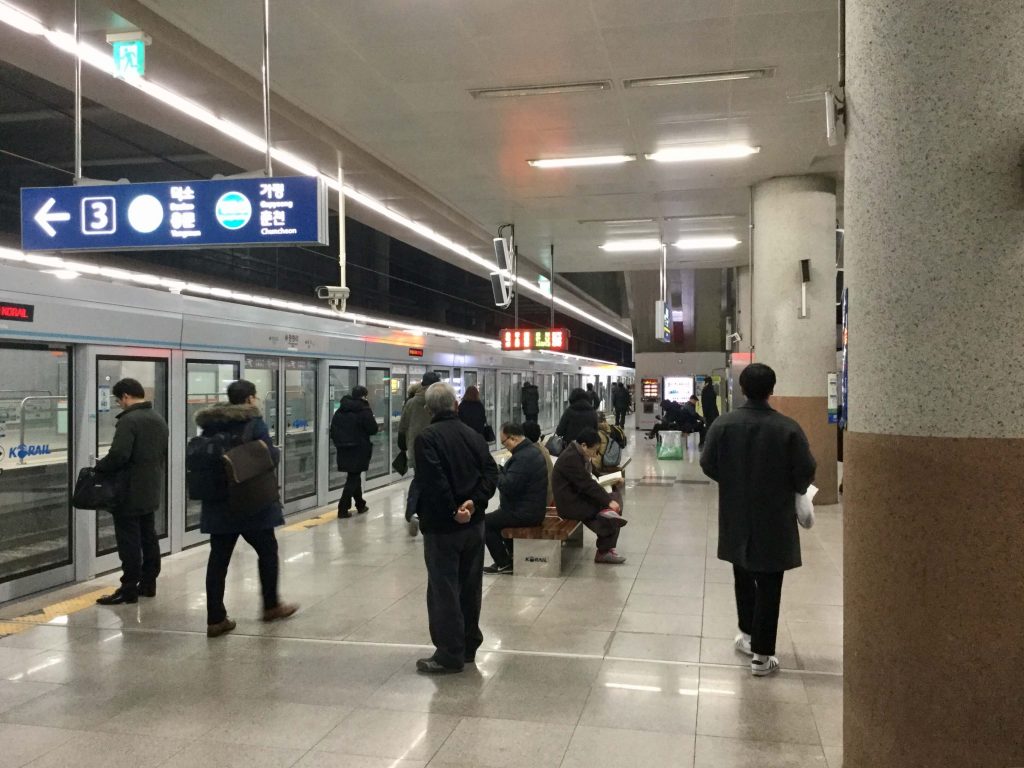 You can go directly up & over from there to the ITX platform without exiting the barriers. So don’t go this way: 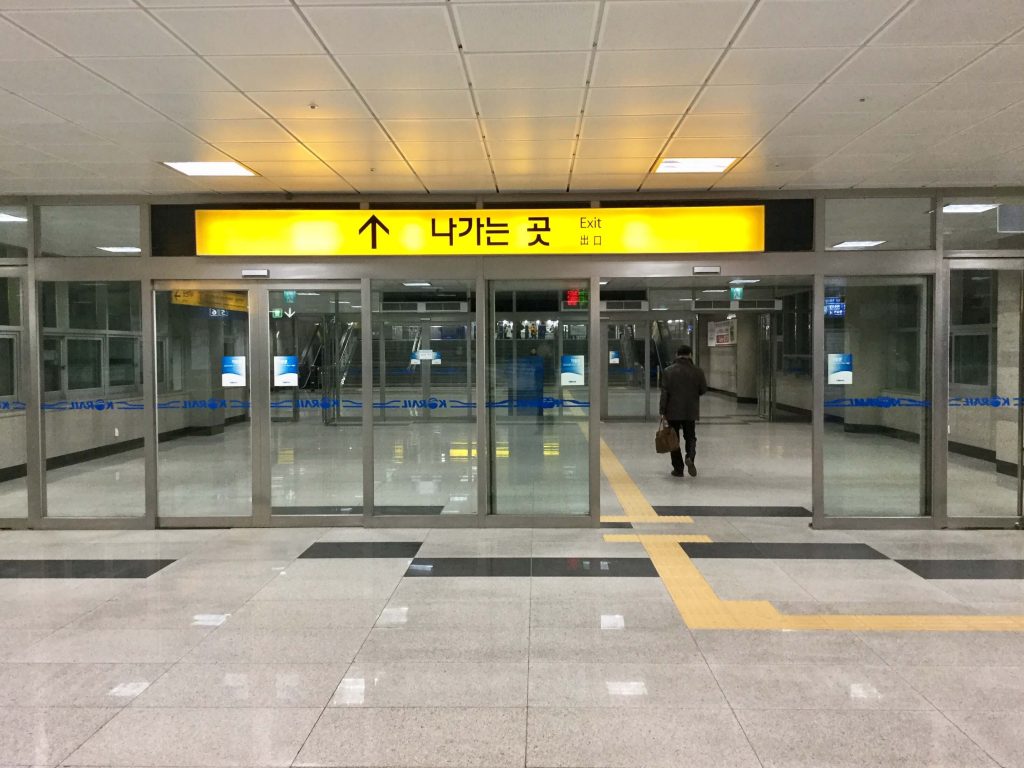 But you do need to swipe out of the subway and buy an ITX ticket, so you need to find these machines (located on the platform or in the walkways between platforms): 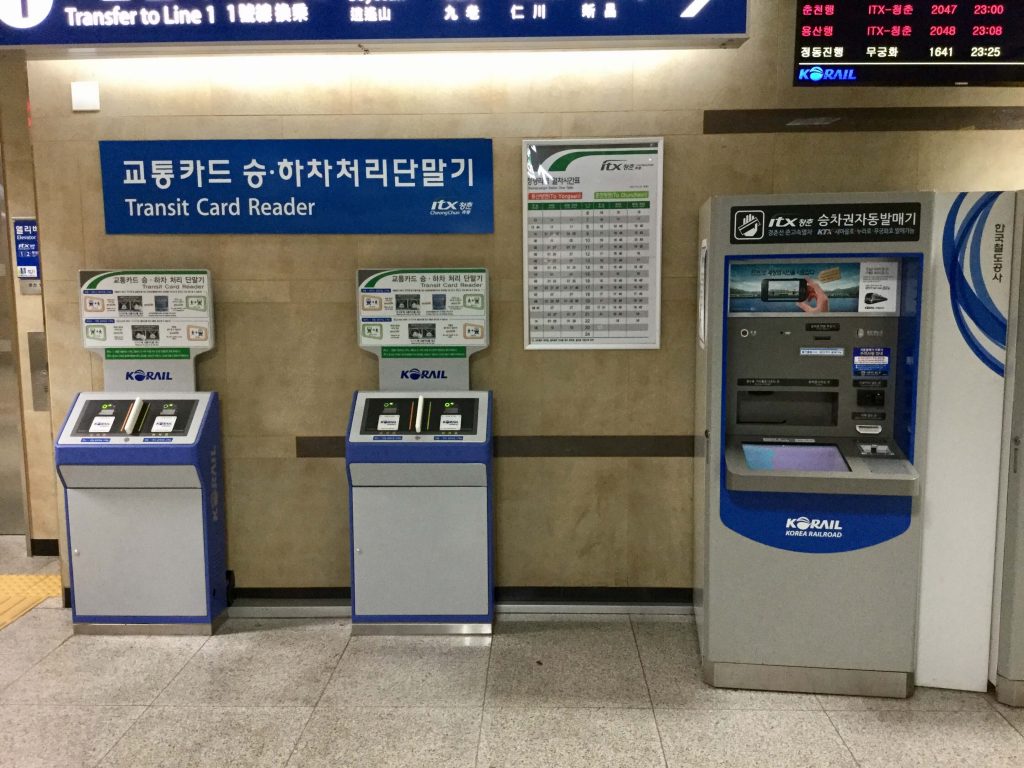 These are specifically for transferring between subway & ITX; swipe your subway card on the transit card reader (the ones on the left in the above pic) to officially exit the Metro, and buy an ITX ticket from the Korail ticket machine (on the right in the above pic). When you swipe out of the Metro, do it on the right-side panel of the transit card reader: When going the other way (from ITX to subway), you can just swipe yourself into the Metro using the left-side panel on the transit card reader.

If you’re boarding the ITX without riding the Metro first, just buy your ticket from a counter or machine on the station concourse as usual. The train will be announced as bound for Chuncheon, the final stop; Baegyang-ri is a couple of stops before Chuncheon.

The ITX doesn’t stop at Baegyang-ri year-round though; it’s only included as a stop from mid-December to early March, and only for some trains, so check the schedule on the Korail website. If you go very late or early in the season, the ITX may not be an option.

Once at Baegyang-ri, the shuttle bus pulls up and waits in the parking area over to the right just outside the exit; it’s free of charge, runs every 20 minutes, and can drop you at the main Ski House base or the Challenge House base (the latter being where beginners should go). 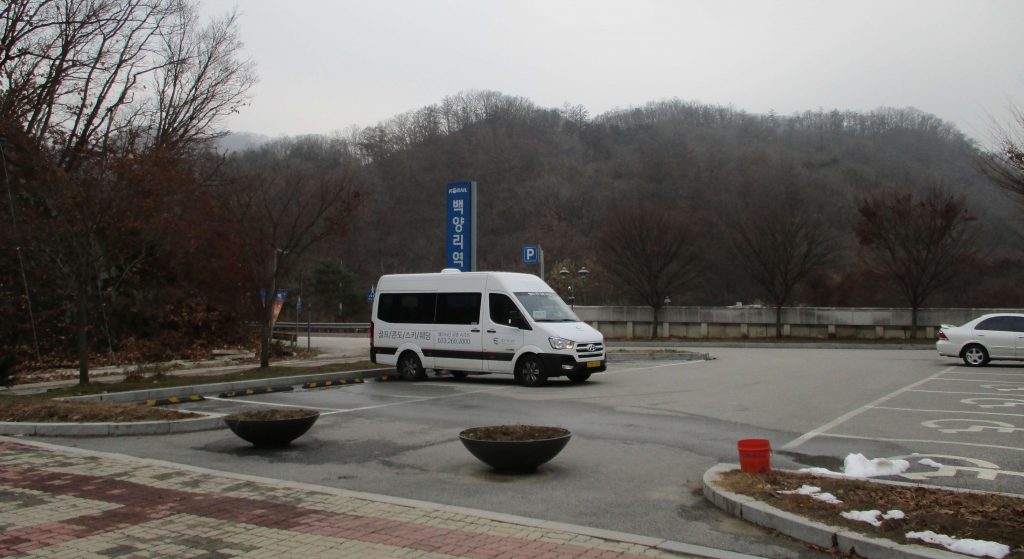 Elysian Gangchon also operates resort shuttle buses directly to / from various points in Seoul, free of charge; when heading home in the evening, it’s simple enough to jump on one of these from the shuttle bus stops outside the Ski House base (there’s a small shuttle bus office in the parking area there, but with limited English spoken by the staff present when I went to make enquiries). It takes 2.5 hours from Elysian to Myeongdong; buses also go to Dongdaemun, Seoul Station, Hongdae, Gangnam, Jamsil, Jongno, and points between. Unfortunately, to take one of these buses to the mountain in the morning requires a reservation, and the only way I could establish for making one without Korean language ability is to have a Korean-speaker do it for you. Therefore my advice is go there by train, and return either by train again, or by shuttle bus if the time suits you (departure was 6pm in the 2016-17 season). 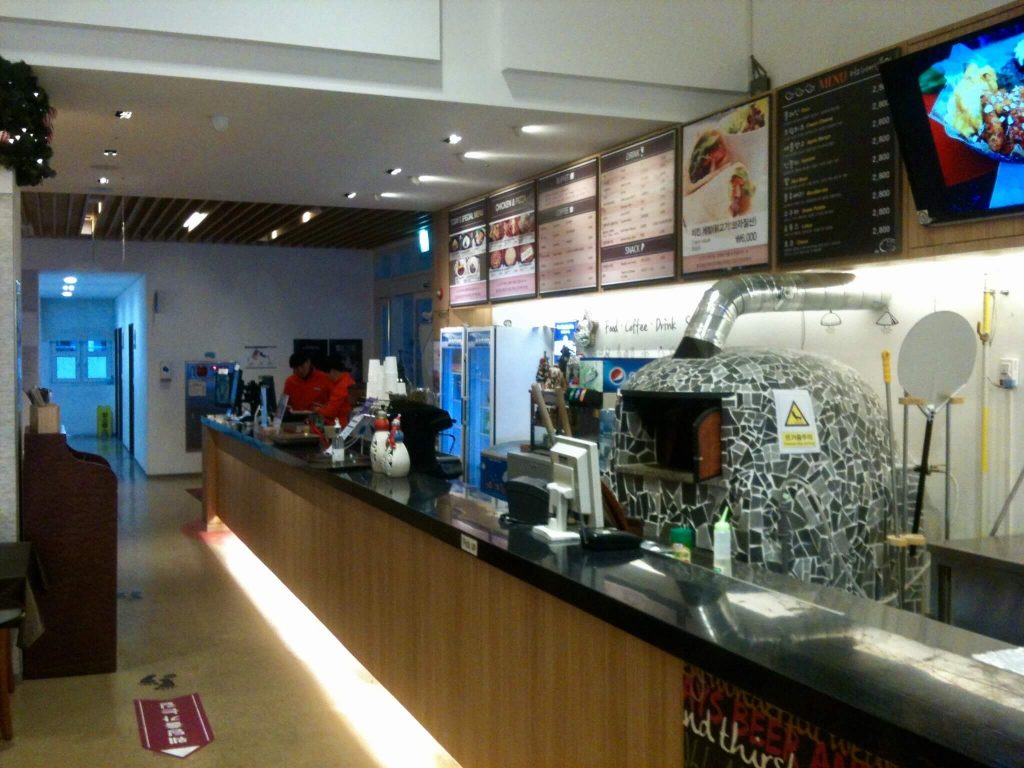 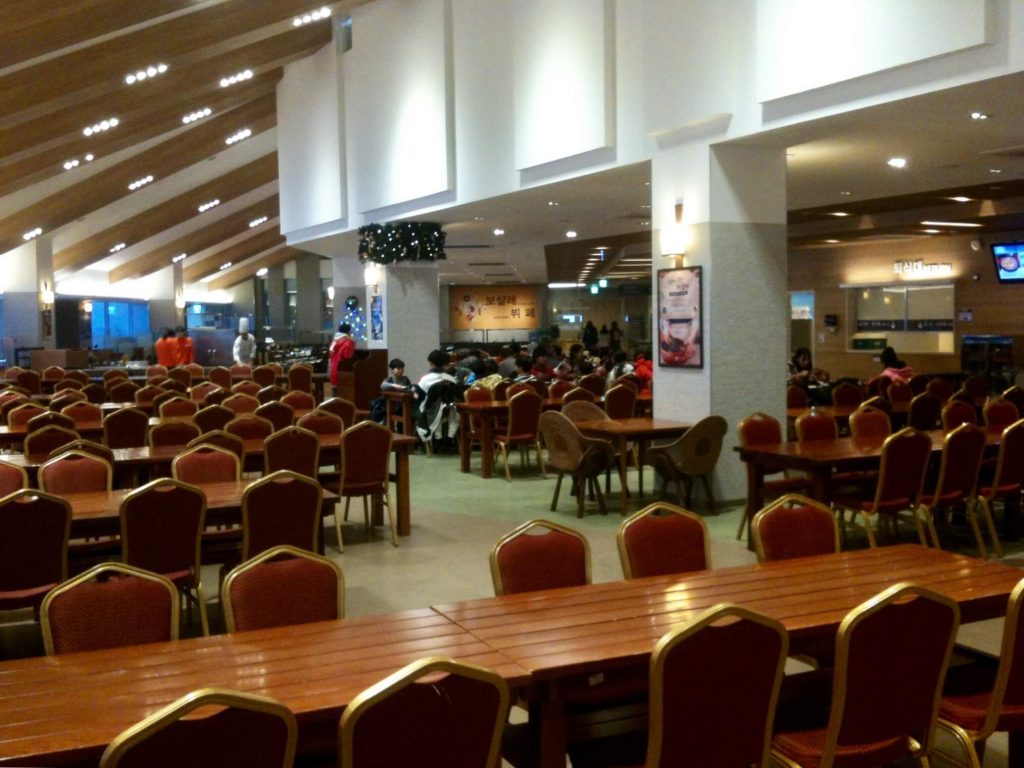 Any questions about Elysian Gangchon? Leave a comment below and I’ll get back to you.