Eden Valley Ski Resort is perched in the mountains just above the city of Busan, South Korea’s second city and largest port. Given the location on the south coast and the fairly low altitude, it should be no surprise that Eden Valley sees very little snow and generally doesn’t have great riding conditions. However, I was pleasantly surprised by the size of the place – don’t get me wrong, it’s definitely small, but it’s larger than I was expecting for the local hill of a south coast city and is of comparable size to the Seoul area hills (see this Korean ski resorts size comparison)

The vertical drop is an underwhelming 160m, with 3 chairlifts. There are a handful of routes down on wide open pistes. To be honest it’s a mediocre piece of terrain with a gentle gradient, and it doesn’t take long to ski the place out.

It definitely isn’t worth travelling all the way from Seoul to hit Eden Valley (believe me – I’m speaking from experience! You can hit High1 in the same travel time from Seoul), but if you’re in Busan or Ulsan it’s a decent enough spot to get your fix. It also has cool views, both of Busan below and of the wind turbines along the ridge. 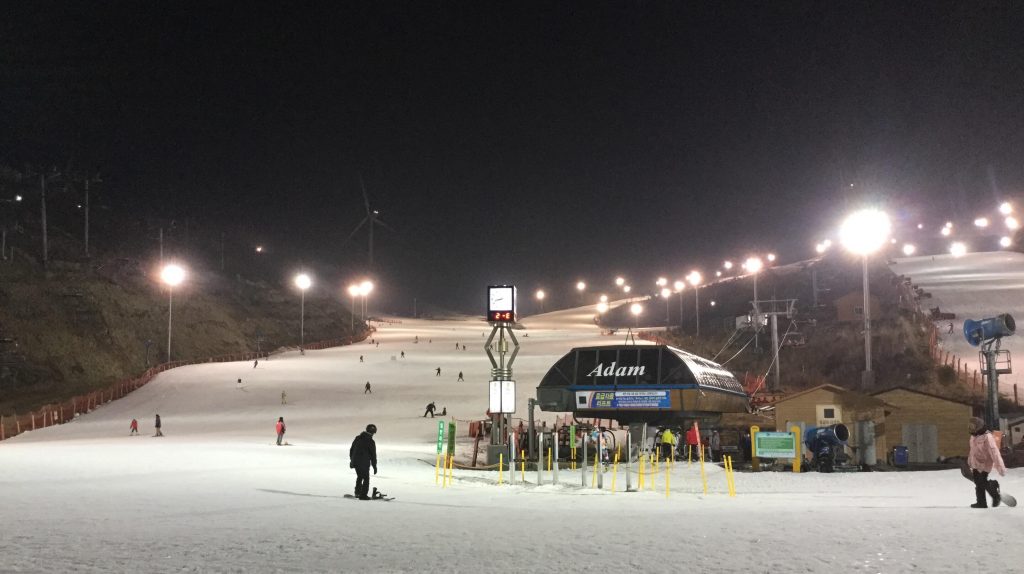 There’s no freestyle at all at Eden Valley, so it really doesn’t have much for advanced riders; it’s a fine place for learning though, and for those pushing on to intermediate.

Eden Valley is good for:

It’s pretty cool to snowboard directly under the massive wind turbines on the ridge – the only such place I know of (other than Vancouver’s Grouse Mountain, but they only have one small turbine). Also if you’re up there at night you can catch some views of the city lights below.

Eden Valley is not so good for:

Freestyle (there isn’t any)

Eden Valley follows the standard ticketing model in Korea, with the operating hours split into day & night by a 2-hour snow grooming break at 5pm; the daytime hours are subdivided into morning and afternoon, and the nighttime hours are subdivided into evening and midnight. You can get a lift ticket for any of those slots, pay a little more for a 5-hour ticket, or more again for two slots combined, as shown here (these are the 2016/17 rates, click to enlarge):

If you need rentals it may be cheaper to book a package (see here, here including transportation, or here for the overnight option), depending whether or not you want to buy a full lift pass or take a lesson.

There’s a hotel at Eden Valley right at the base of the ski slopes, which you can book here or here. You can also book it as part of a package including transportation, rentals etc.

There are also some hotels nearby in Yangsan (see listings) – they’re of the ‘love motel’ variety, which might put you off, or might make for an interesting Korean experience!

If you’d rather stay in Busan proper, search for Busan hotel deals (of course they also have plenty of listings in Seoul, too)

Airbnb is also a great choice for Busan – hosts usually have it set up so you can arrive & check in by yourself without having to wait around or meet anyone, and the housing standards are decent with underfloor heating and excellent internet connections as standard. If you haven’t used Airbnb before, you can get a 35-dollar discount off your first rental by signing up through Snow Guide Korea; simply click on this link and register!

How to get to Eden Valley

There is a resort shuttle bus, but it runs by reservation only, only when there’s a minimum of 7 passengers, and costs 3,000 won from Yangsan (양산) Station or 4,000 won from central Busan (부산); if you want to try and book it, you have to call New Busan Tour on 051-806-8811 (details here (Korean only); shuttles from Ulsan 울산, Gimhae 김해, and Daegu 대구 are also listed on that page).

Much easier (especially if you don’t have 7 people) is to book this shuttle bus, though it’s a bit more expensive. If you need rentals etc anyway then the easiest way is to go for the full package here (or the 2D1N package). They can also arrange private van hire.

Of course, you could also take a taxi up – it’s reasonable if you have a group to split the cost. Yangsan Station is the northern terminus of Busan Metro Line 2; this is the closest you can get by public transport, and the best place from which to take a taxi. A taxi from Yangsan should be around 20,000 won.

If coming from Seoul:

Whatever you do, don’t try to take a taxi from Wondong Station on the main Seoul – Daegu – Busan railway line (as advised elsewhere online!). I actually tried this, but Wondong’s a tiny little town with no taxi rank and I ended up visiting the lone coffee shop and asking where I could find a cab. They tried calling one for me, but none would come out there: I ended up having to get back on the train (after a long wait) one more stop to Mulgeum and taking a taxi from there, which is significantly further than from Yangsan metro station.

In other words; if coming directly from Seoul, take the KTX all the way to Busan, then ride the metro up to Yangsan, then take a taxi from there. But really, if you’re willing to spend that much time and money travelling from Seoul, High1 and Yongpyong are much, much better calls.

Any questions about Eden Valley ski resort? Leave a comment below and I’ll get back to you.

For full reviews of every ski resort in Korea, see here