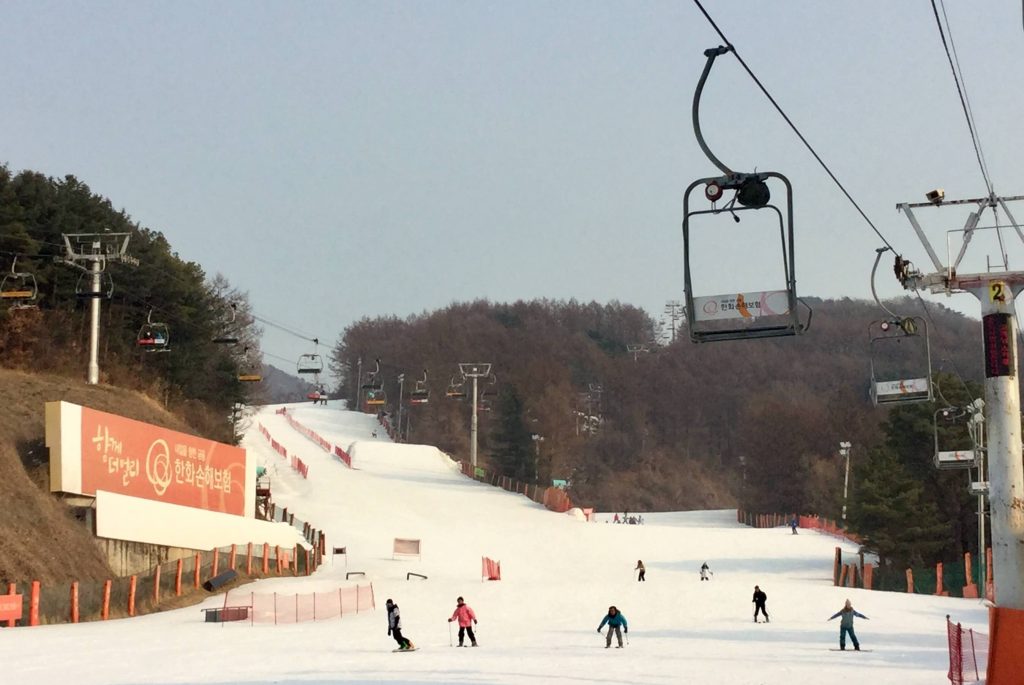 To be frank, the natural conditions in Gyeonggi-do aren’t really ideal for skiing – the mountains are small, and the annual snowfall very light. However, the frigid winter temperatures make the construction of small ski hills possible with snowmaking, and the large local population is enough to support a handful of resorts. Gyeonggi-do is wrapped around the Seoul-Incheon conurbation like some sort of donut with a bite taken out of it, consisting mostly of low mountain ranges and containing a large number of satellite cities which make it Korea’s most populous province – the Greater Seoul area is usually considered to be composed of Seoul, Incheon, and Gyeonggi-do, which combined are home to half of South Korea’s population. It’s this huge concentration of people that means there’s plenty of demand for local skiing, even if it is mediocre.

The Seoul area hills are universally small, lacking in challenging terrain, and reliant on artificial snow, with mostly mediocre (if any) freestyle offerings (the exception being Jisan Forest, which makes a good effort with the terrain park).

But while they may be lacking in the terrain and snow departments, fact is they’re right on the edge of the city meaning you can easily head up for a quick half-day and be home in time for tea, or go for an evening’s skiing under the lights after a day at work. They also have outstanding base area facilities, and make the most of what they’ve got.

There are presently 5 ski resorts in Gyeonggi-do. Additionally, although not technically in Gyeonggi-do (it’s just across the boundary in Gangwon-do), Elysian Gangchon is also included on this list due to it being directly accessible using the Seoul Metro, so here are the 6 local hills for the Seoul area: