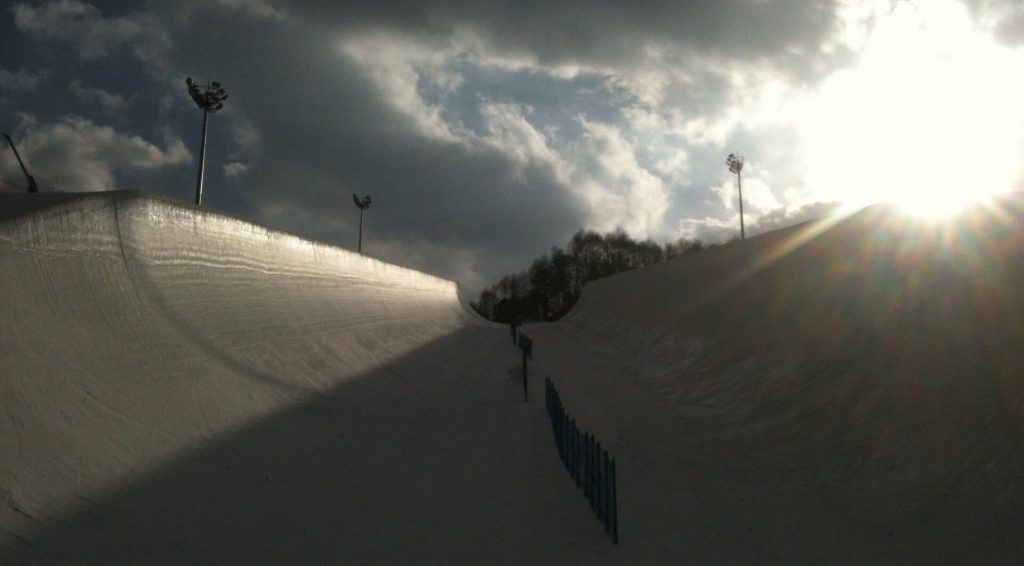 …and Chloe Kim destroying it: 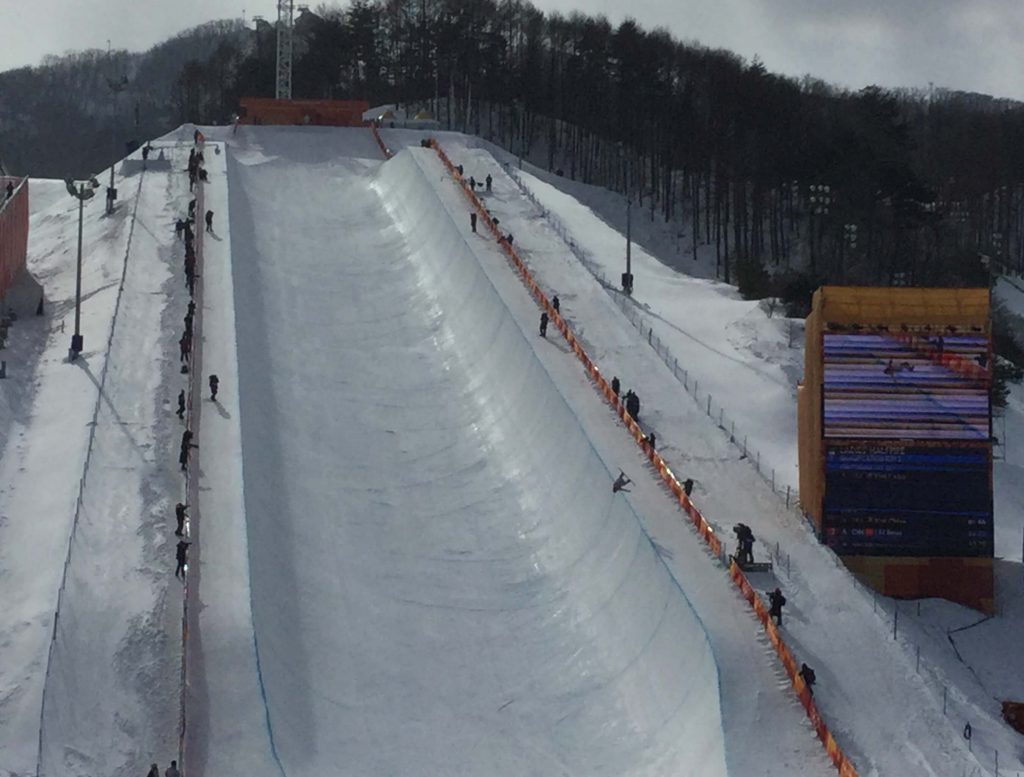 While still very small by European or North American standards, Phoenix Park is the fourth biggest ski area in Korea and they make a big effort to make the most of what they’ve got. It also has one of the better natural snowfall records in Korea, so isn’t quite as reliant as most Korean hills on snowmaking – that still isn’t saying much though, and from this author’s observations they’re going to have to work hard keeping it all ship-shape in 2018 (but no harder than they did with Cypress Mountain for Vancouver 2010, so I’m sure they’ll pull it all off. Update: and so they did)

Phoenix Park has a gondola and 8 chairlifts going up from the one base area; the gondola goes to the top of the main peak, Mont Blanc, which also has 5 chairs going all or partway up its slopes. A further 3 chairs open up the terrain on the smaller Phoenix Peak (Bulsaemaru) to the side. As noted above, by European & North American standards it’s small; with 380m of vertical the runs are fairly short, and advanced riders will ski the whole place out well within a 4-hour ticket. That said, it still has more satisfying downhill skiing than the majority of resorts in Korea (behind only Yongpyong, High1, and Muju Deogyusan), with a decent gradient and a few nice steep sections. Combined with the good freestyle on offer, Phoenix Park is probably the best option in the country for advanced riders who’re into park & pipe. 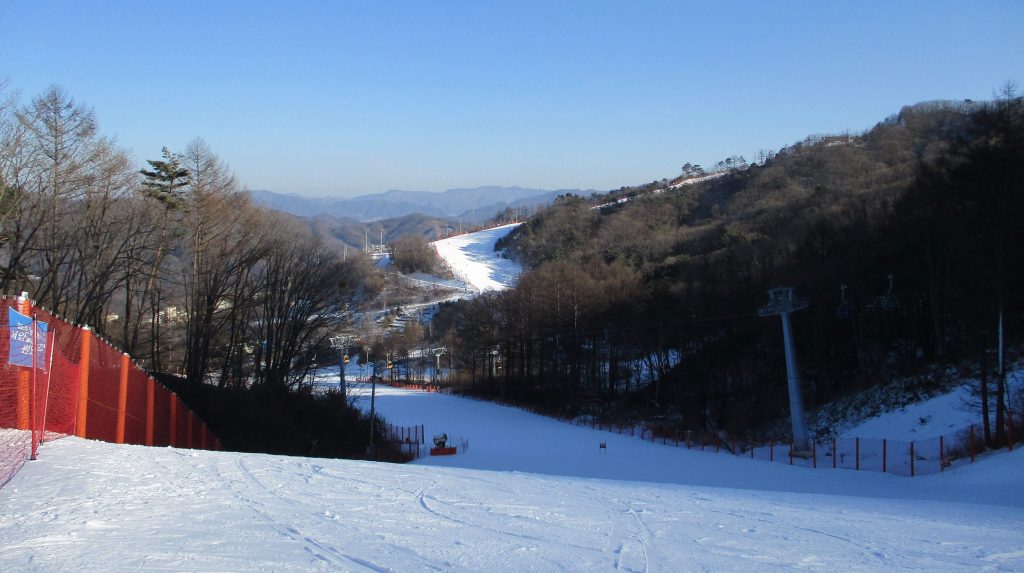 Phoenix Park is good for:

Freestyle; the park is the best in Korea (arguably along with Welli Hilli Park), and it has a halfpipe (one of only a few in Korea).

Phoenix Park is not so good for: 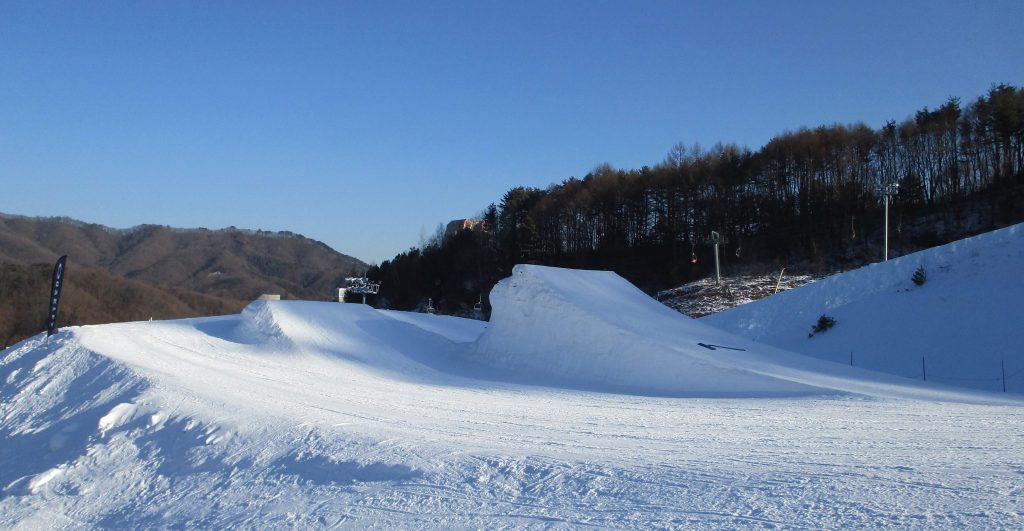 They usually have a boardercross course too, roped off on the right of this pic:

Phoenix Park lift tickets follow the typical ticketing model in Korea, with the operating hours split into day & night by a 2-hour snow grooming break at 4:30pm; the daytime hours (8:30am – 4:30pm) are subdivided into morning and afternoon, and the nighttime hours (6:30pm – 1:00am) are subdivided into night and midnight. You can get a lift ticket for any of the individual time slots, or for various combinations of the above. Also at weekends, operating hours are extended to 4:00am with ‘White Night’ tickets available. Prices range from 50,000 won for a 3-hour Midnight ticket to 89,000 for Afternoon & Night combined (8 hours), see here for details. If you also need rentals it works out cheaper to book a lift & rental combo, see here

Phoenix Park has the usual hotel/condo mega-development at the base of the slopes, and you can view and book their rooms here, here, and here. If you also need rentals etc it probably works out best to book a package, see here

If you’re planning to stay in Seoul and hit Phoenix Park from there, search Hotels Combined for hotel deals in Seoul

Airbnb is also a great choice in Korea, and they have listings near Phoenix Park in addition to those in Seoul. If you haven’t used Airbnb before, you can get a 35-dollar discount off your first rental by signing up through Snow Guide Korea; simply click on this link and register!

How to get to Phoenix Park

The new Gangneung KTX line opened in late 2017 and serves nearby Pyeongchang Station, about 90 minutes from Seoul Station for 19,700 won. Phoenix Park has a free shuttle bus for Pyeongchang Station (25 minutes, also calling at Jangpyeong bus terminal), here’s the 2019 schedule: 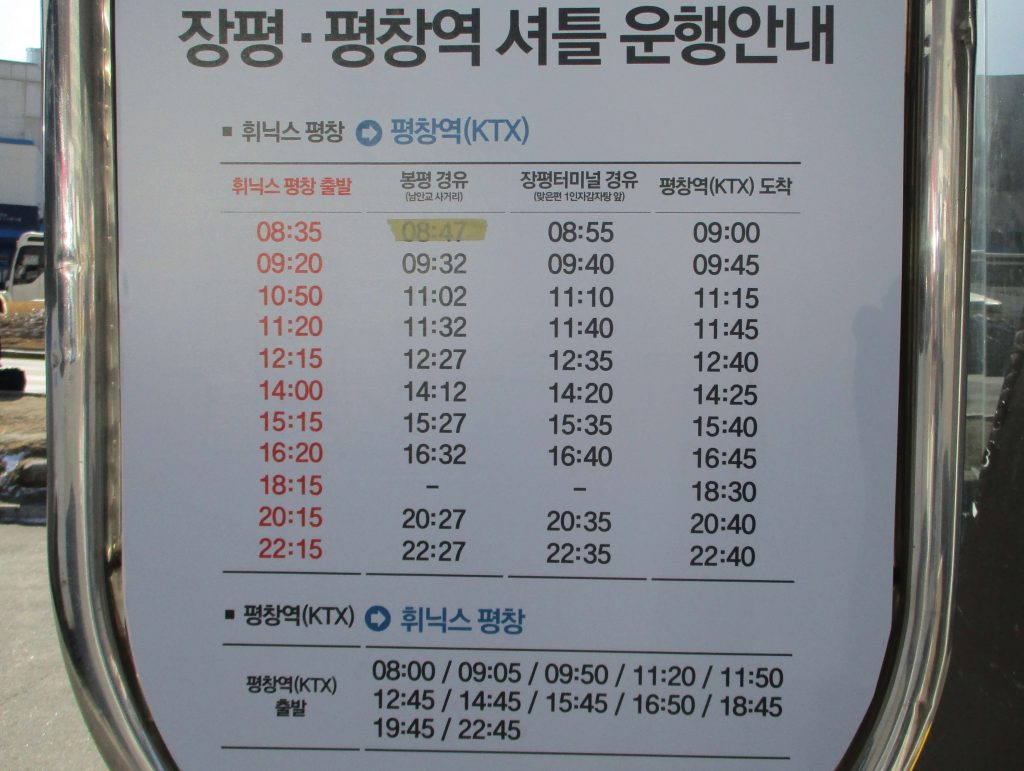 The bottom section shows departure times in the other direction, from the KTX station to the resort.

There are also direct shuttle buses from Seoul to Phoenix Park & back (2-3 hours depending on boarding point, 15,000 won each way); you can make online reservations here (in English). Reservations must be made by 5pm the previous day for morning buses to the resort, however the evening return buses can be booked on the day at the resort (ask at reception). If you have trouble with that you can book the shuttle on Trazy here; they can also arrange direct private airport transfers

Should you want to travel by public highway bus, the resort’s free shuttle from the KTX station also calls at Jangpyeong bus terminal (see schedule above) which can be reached by highway bus from Dong Seoul (East Seoul) Terminal located next to Line 2’s Gangbyeon Station. The highway bus takes 2 hours, costs around 12,000 won, and runs roughly every 30 minutes, and then the shuttle takes another 20 minutes. The boarding point is in front of this building opposite the bus station, though this may change so check when you arrive: 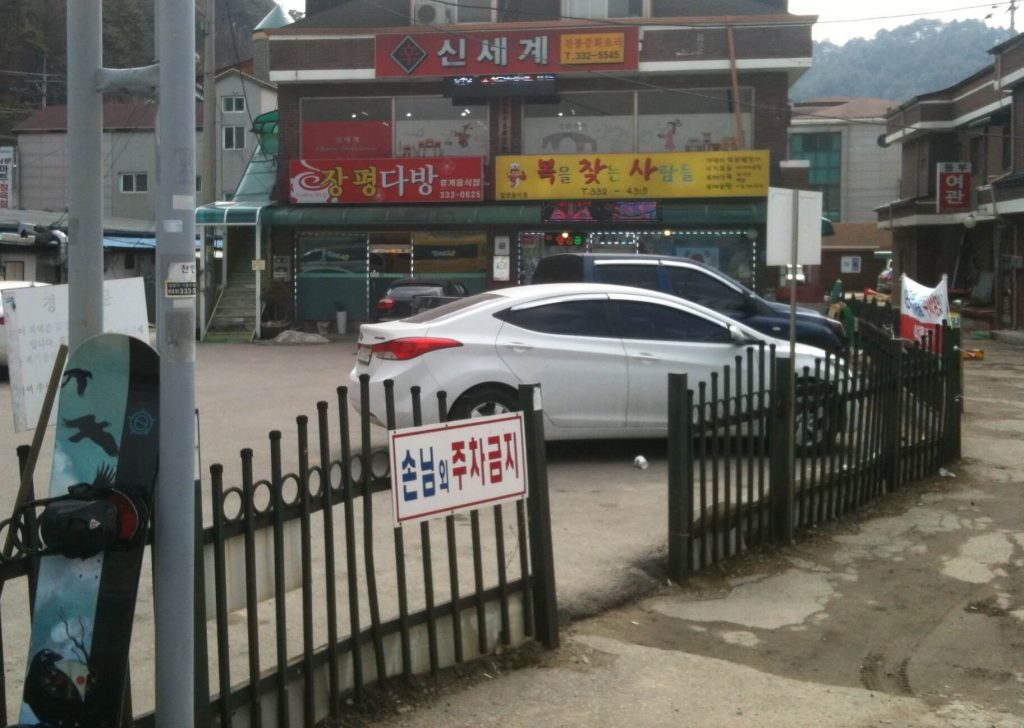 If you take a taxi from Jangpyeong, expect to pay around 17,000 won (there’s a taxi company just outside the bus terminal).

If you also need rentals etc it may be best to book an all-in-one package including transportation (see here, or here to include accommodation)

Here’s the setup for the Pyeongchang 2018 moguls & aerials: 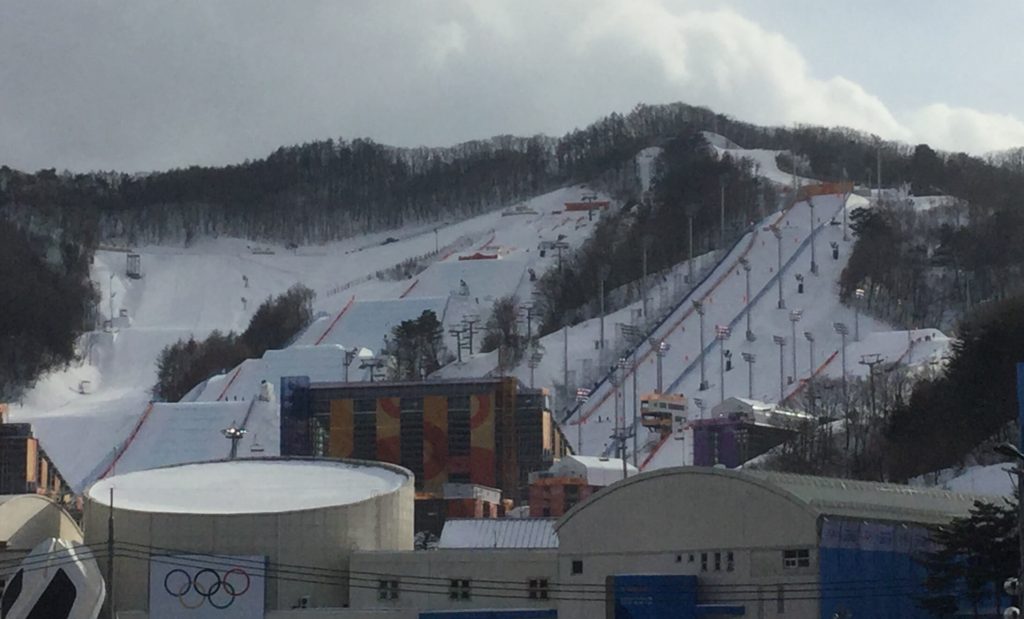 And some scenery shots from the top (Welli Hilli Park is visible in the distance in the first pic, and in the second Yongpyong is actually visible in the far distance bang in the centre of the horizon, though it’s hard to make out in the pic): 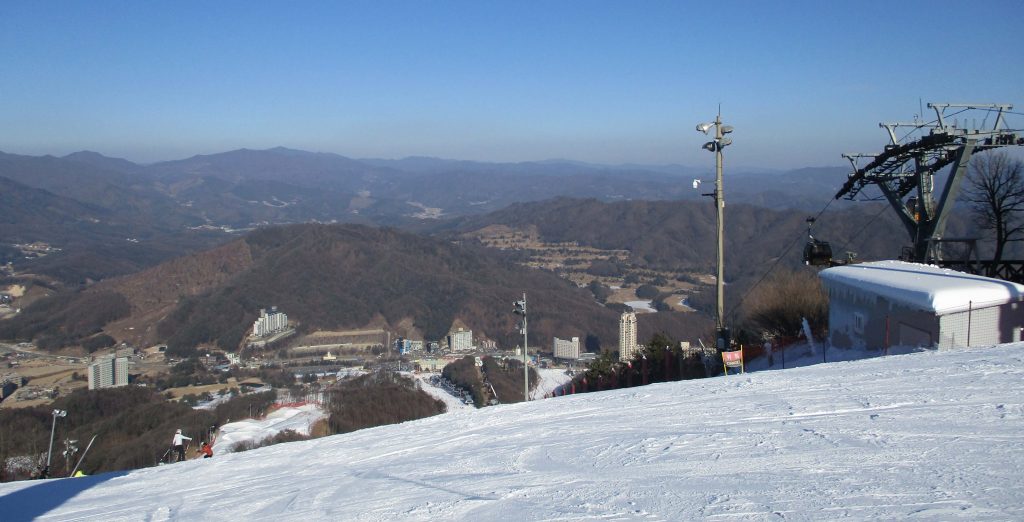 Any questions about Phoenix Park? Leave a comment below and I’ll get back to you.

Also check out the best Korean ski resorts according to various criteria, and this size comparison of Korea’s ski resorts using satellite imagery

If you’re visiting before/during the Olympics, see the top 5 hills to ski at during Pyeongchang 2018, and for more information and the latest updates on Pyeongchang 2018 see here